The 10 smartest countries based on math and science

Singapore is the smartest country in the world, followed by Hong Kong, South Korea, Taiwan, Japan, Finland, Estonia, Switzerland, Netherlands and Canada rounding out the top 10.

The BBC says this is the conclusion of the Organization for Economic Cooperation and Development (OECD), an economic think tank that outlined its findings in a new report ranking countries' school systems based on students math & science test scores.

The report – which the BBC received early access to – will be formally presented at the World Education Forum in South Korea next week.

Of the 76 countries ranked, the top half is largely dominated by Asian nations, the BBC reports. European countries take up a majority of spots 5 through 30 in the rankings, and the United States sits at the tail end of the top third, tied at 28th with Italy. The bottom half of the rankings feature mostly African and Latin American countries.

The biggest ever global school rankings have been published, with Asian countries in the top five places and African countries at the bottom.

Singapore heads the table, followed by Hong Kong, with Ghana at the bottom.

The UK is in 20th place, among higher achieving European countries, with the US in 28th.

The OECD economic think tank says the comparisons - based on test scores in 76 countries - show the link between education and economic growth.

"This is the first time we have a truly global scale of the quality of education," said the OECD's education director, Andreas Schleicher.

"The idea is to give more countries, rich and poor, access to comparing themselves against the world's education leaders, to discover their relative strengths and weaknesses, and to see what the long-term economic gains from improved quality in schooling could be for them," he said. 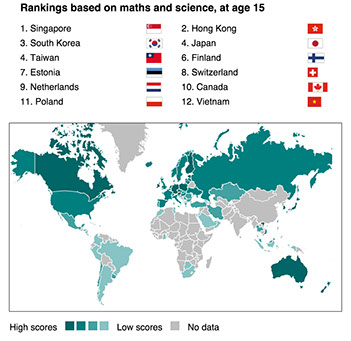 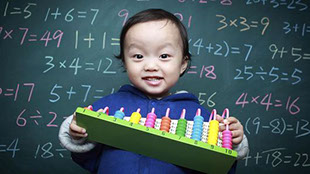 Over 10,000 pupils aged 5-6 and 11-12 and across 140 British schools, were taught for one academic year using a method from Singapore, called "Maths Mastery". Researchers found the pupils' maths test results improved compared to other schools.

The study, by UCL Institute of Education and the University of Cambridge, said this improvement was "roughly equivalent to one additional month of progress over the academic year".

This extra month is very valuable, as the study cited research claiming that an extra month of progress in maths at the age of 10 increases average wages by around £100 to £200 ($159 to $318) per year in later life.

The "Maths Mastery" approach teaches fewer topics in greater depth. Each child must learn and understand the topic before the whole class can progress to the next part of the syllabus.

"Maths Mastery shouldn't be seen as a 'silver bullet'; there is no escaping that the effect of the program was relatively small, though welcome," said UCL's Dr John Jerrim, the study's lead author, in a statement. "Yet, given the low cost per pupil, it may nevertheless be a program worth pursuing. 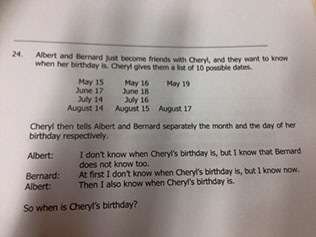 The Math Question That Went Viral

One word problem from a Singaporean school exam briefly became the talk of the Internet last weekend.

It didn't rise quite to the level of "The Dress"—the recent quandary that resulted in accusations of color-blindness across the Internet—but it still gave the education world its own viral moment over the weekend. A viral math question, in fact.

Last Friday, the Hello Singapore TV host Kenneth Kong posted a mathematical riddle to his Facebook page with the caption: "This question causes a debate with my wife .... and its a P5 question." The puzzle went viral across the country, with people ranging from perplexed adults to eager teenagers grappling with the simple question: "So when is Cheryl's birthday?"

The hysteria wasn't limited to Singapore. The question immediately made the rounds on Twitter—along with the hashtag #cherylsbirthday—and Reddit. It even made its way to the Australian Federation of International Students' Facebook page.

Singapore is the smartest country in the world...

The Math Question That Went Viral

Students understand the concepts and make connections between the numbers, learn how to do mental calculations and as a result are able to not have to review, drill and practice to learn the necessary math to move on to the next concept. 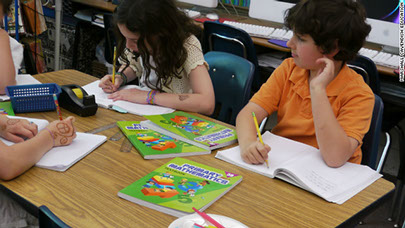 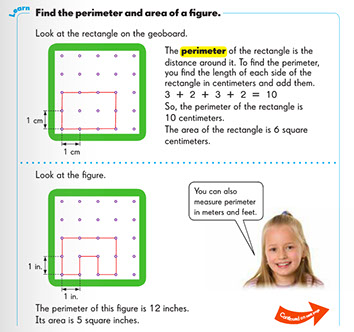 Students are given great visual tools, such as number bonds and bar models that visually explain the relationships amongst numbers. Students are constantly challenged to really think as they do math, and because they can’t just race through the problems, they find it mentally stimulating

My view: America's students can benefit from Singapore math.

Singapore math is getting a lot of attention as more and more schools in the United States are using Singapore-based methods and materials to improve the teaching and learning of mathematics. Many parents and teachers are wondering if a change is really necessary. The answer is yes.

I’ve seen firsthand the difference the Singapore math approach can make. I began using Primary Mathematics textbooks from Singapore’s Marshall Cavendish Education in 2000 when I was a classroom teacher.

The Singapore method of math instruction has been making waves among parents, teachers, schools and the public in general. But what is it really all about? Is there basis behind all the hoopla? Ms. Virgie Gayda Esteves, the middle school math subject area coordinator of the Ateneo Grade School where Singapore Math has been adapted into the curriculum for the last six years now, gives us a crash course.

“At its core, Singapore math is just like any other math instruction method,” explains Esteves. “However, the Institute of Education of Singapore really studied how to teach math, such that the pedagogy and theory of math are really integrated.”